Can nuclear energy be used for cleaner cars?

Can nuclear power help make road transport more sustainable and reliable? Noel Padgaonkar, software engineer at Nuclear AMRC Midlands, tackled the question at a recent speaking competition arranged by the Nuclear Institute’s Young Generation Network in the Midlands. This blog is based on his prize-winning presentation.

Being a technology geek and an automobile enthusiast, I decided to enter the speaking competition and portray my thoughts on the applications of nuclear energy in the automobile sector.

Since the 1800s, human activities have been a major driver to climate change. These activities have led to the increase in levels of greenhouse gases in the atmosphere, increasing global temperatures. UK government figures show that about 24 per cent of emissions are caused by transport, mainly due to the use of petrol and diesel.

The UK is now aiming to achieve net zero emissions by 2050. To achieve this, the government is accelerating efforts towards the use of electric vehicles.

Although it is believed that electric vehicles reduce carbon emissions, there are challenges which need to be addressed. Firstly, electric vehicles are not as clean as they are portrayed, due to the electric grid used to charge vehicles which still relies heavily on fossil fuels. Users also commonly have range anxiety about their vehicles. Nuclear energy could address these challenges.

The first challenge is the source of electricity. Nuclear energy, being a low-carbon source of energy, can be used to supply charging stations and lower the dependency on fossil fuels. This is an opportunity for small modular reactors (SMRs) to supply on-road charging facilities to tackle range anxiety for electric car users.

Nuclear-powered cars aren’t a new idea. In 1957, Ford proposed a concept vehicle called the Ford Nucleon which was powered by a small nuclear reactor situated at the rear of the vehicle. Ford claimed that this vehicle could cover about 5,000 miles between charging stations. 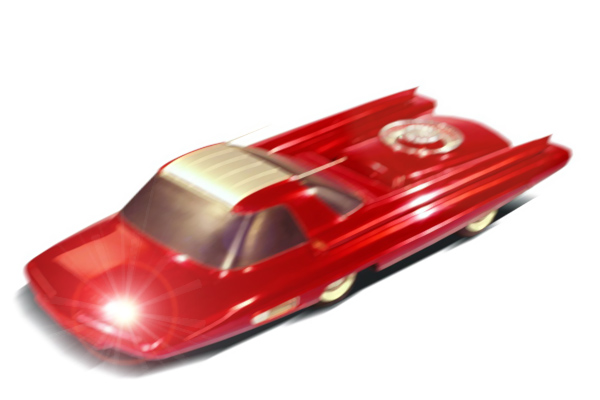 Another problem which would need to be addressed is safety during a collision or car crash. Although the small nuclear reactor at the back of the vehicle would have strong shielding, there might be a possibility of radiation leaks or overheating in case of a crash. This would be a major concern for the general population if the vehicle was driven on the road.

Since I first came across the Ford Nucleon, I have researched the possibilities of harnessing nuclear energy in the automobile sector. Some scenarios have intrigued me.

Engineers at the Argonne National Laboratory (ANL) in Illinois have designed a micro reactor called MiFi-DC (MicroFission Direct Current). The idea is to install these micro reactors at rest stops along the roads, producing high amounts of electricity which can recharge electric vehicles in a shorter time.

The ANL engineers say that it is a safe and flexible system which can operate for more than 10 years. The design uses a special type of nuclear fuel, tri-structural isotropic (TRISO) pellets consisting of low-enriched uranium with protective layers of carbon and ceramics. This protective layer ensures the safety of the MiFi-DC microreactor.

I also came across a concept called the diamond battery. In 2017, researchers led by Professor Tom Scott at the University of Bristol demonstrated a battery containing carbon-14 which can generate a small electric current when placed in a radioactive field. Carbon-14 is generated in graphite blocks used to moderate the reaction in nuclear power plants. These batteries can be used in low-power devices such as sensors without replacing them for many years.

The thinking behind this concept was to reduce the amount of nuclear waste by turning it into a nuclear-powered battery, reducing the cost and challenges of storing the waste. In terms of safety, Dr Neil Fox from the University of Bristol’s school of chemistry mentioned that when carbon-14 is safely held within the diamond, no short-range radiation can escape thereby offering protection against the radioactive batteries.

My thought is to use this diamond battery in the sensors in an electric vehicle – such as climate control and lights – which can reduce the dependencies of these components on the vehicle’s main battery, thereby improving the range of the vehicle.

On further research, I came across a Californian start-up called Nano Diamond Battery (NDB) which is developing a nuclear battery which could last up to 28,000 years without recharging. This battery produces stable power by converting the energy released from radioactive decay into usable energy. The company proposes to optimise this technology by reusing nuclear fuel and recycling to extract radioisotopes.

This could produce a high amount of energy and could be used in an automobile, and the company aims to address the challenges of electric vehicles around battery duration and mileage. The NDB is designed to fulfil international nuclear safety standards for systems, equipment, or materials. This might be a solution to avoid any radiation leaks in case of any collisions or car crashes.

In conclusion, there are numerous applications where the automotive sector could make use of nuclear energy, although all would have to meet a strict set of safety standards to be used by the public. Further research can be carried out to make this technology more affordable, thereby working towards meeting the target of net zero emissions.

Manufacturers need to get to grips with cybersecurity

Gaining experience across the industry

Paving the way to a carbon-free future